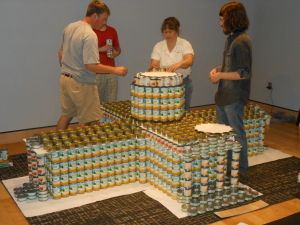 The Canstruction event was hosted at the Mulvane Art Museum on the Washburn University campus May 31. There were five teams participating by building structures from ordinary cans of food. The team members were all employees of the companies that chose to participate in this experience. There are several architectural firms that participated and also one engineering company. Canstruction was jointly sponsored by the Mulvane Art Museum and Harvesters Community Food Network.

There was no limit to the number of members that a team could have for this occasion. The only rule was that they were only allowed to have five team members out on the floor building at any one time. This rule was put in place for crowd control reasons because of the small amount of space that was available for the event. The public was also able to stand in the lobby of the Mulvane Art Museum and watch the structures being built.

The teams were able to start constructing the structures Saturday at 8 a.m. They had to have the structures completed by 8 p.m. the same night. The structures will be judged and the winners will be announced at the CAN OPENER event at 5:30 p.m. on Friday, June 6 at the Mulvane Art Museum. There will be awards given based on such criteria as aesthetic appeal and the nutritional content of the cans of food used to build the structure. Another award that will be given later on once the exhibit will no longer be displayed is the People’s Choice Award.

“Harvesters likes to do an event like this for a couple of different reasons,” said Biles. “It allows them to have food out on display in the community and raise awareness about the issue of hunger and it also serves as a food drive for them since all of the cans of food that are used in the event are donated to Harvesters once the exhibit is closed and the structures are taken down.

“All of the cans will go to hungry people in the Topeka area,” said Biles. “We are excited to bring this event to Topeka and it is very fun and I think all of the teams are having fun as well.”