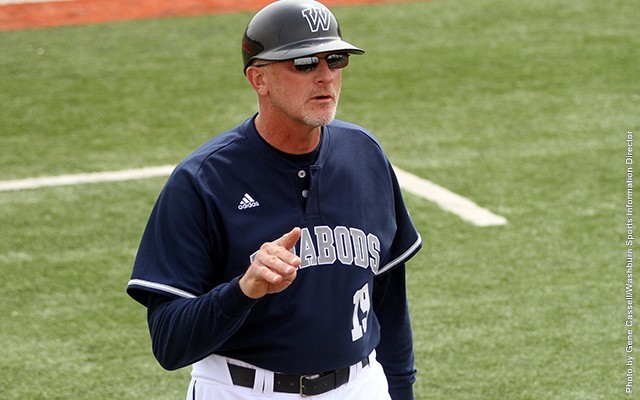 Steve Anson, Washburn head baseball coach since 1980, died in a tree-trimming accident on his property outside Topeka Sunday afternoon.

Anson is survived by his wife, Dena Anson, the University Relations Director at Washburn.

“We are shocked and saddened to hear the news,” athletic director Loren Ferre’ said Sunday. “Steve was so loyal to the program and well known around the community. It’s hard to put into words right now what we’re feeling as a program.”

“On behalf of the Board of Regents, administration and faculty, as well as the athletic department and students, we mourn the loss of Steve Anson,” said Bill Sneed, chair of the Washburn Board of Regents. “Our thoughts and prayers are with Dena and their entire family.”

“This is a huge loss not only for the team and the athletic program, but for the countless number of lives he has touched in his career,” said Ferre’. “He’s been so well-known and liked throughout the baseball community. It is a tragic loss for all of us.”

Anson has coach three players to five different All-America awards. Two players have been selected in the MLB Draft and two have gone on to play in the Majors. Most recently, shortstop Jerad Head signed as an amateur free agent with Cleveland in 2005 and made it to the Majors in 2011.

Anson has coached 18 all-region players, 12 all-MIAA first-teamers and 96 total all-MIAA selections. His players have also excelled in the classroom with two players earning the highest honors. Andy Petz was named first team Capital One Academic All-America in 2011 and Pat Colley earned a second team honor in 2000 and a third team honor in 2001.

Anson started his career when Washburn was still a member of the NAIA and Central States Intercollegiate Conference. He led the team to five NAIA tournament appearances and was CSIC coach of the year in 1989. He earned the MIAA coach of the year honor in 1994 as his squad won the MIAA North Division title and finished runner-up at the conference postseason tournament.

Anson joined the Washburn staff in 1979 after one season as head coach at Wayne State (Neb.). While at Wayne State, the Wildcats were 23-22 and Anson was picked as NAIA Area III coach of the year.

As a member of the Washburn athletics staff, Anson has also served as men’s basketball assistant coach and assistant athletic director. Current head basketball coach Bob Chipman hired him as an assistant.

“He’s an unbelievable friend,” said Chipman. “I’m so glad he was my first hire. Without his loyalty and great love of coaching, who knows if I’d still be coaching. His loyalty is incredible and he’s one of the greatest and nicest guys I know.”

Chipman also echoed how much of an impact Anson had on the players he has coached. “He’s done so much for the players, while they were here and after their college careers. He was a great role model and he will be hard to replace.”

A native of Mishawaka, Indiana, Anson was a true student-athlete for Kansas State University. On the field, he was a four-year letterman who won the Big Eight batting title in 1974 (.439) and earned first team all-conference honors.

Assistant coach Harley Douglas played for Anson from 1997-00 and has been his assistant coach since 2012. “I admired him when I was a player and as a coach since I’ve come here. He’s been a father figure and a friend,” Douglas said. “He would bend over backward for any of us. I’m just one player in the hundreds he’s coached and he’d do it for any of us.”

Complete details of the accident and an announcement of memorial services were not available Sunday night.