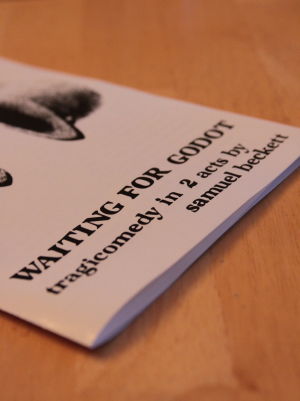 From the moment I stepped into the Andrew J. & Georgia Neese Gray Theatre, my attention was captured. The set of “Waiting for Godot” by Samuel Beckett is decidedly minimalist with only a single, sickly tree and a rock on the stage throughout the whole play. The sight of Estragon, brilliantly played by Colby Cox, sleeping on the ground next to the rock is the real attention grabber though.

The play opens with Estragon, no longer asleep, fiddling with his boot. Vladimir, cleverly played by Andrew Fletcher, soon comes onto the stage and begins conversing with his old friend Estragon as they wait for Godot.

The pompous and cruel Pozzo, played by Dalton Hane, and his faithful slave, Lucky, played by Devin Denman, interrupt Vladimir and Estragon’s wait for Godot. The pair entertains not only Vladimir and Estragon, but the audience as well, as the relationship between Pozzo and Lucky is acted out. The audience finds themselves hating, then pitying, then hating again the mad Pozzo as he mistreats Lucky, who intrigues the audience as a character with more depth than is immediately realized.

Pozzo and Lucky do not stay long though, and soon Vladimir and Estragon are left alone again, with Vladimir pondering if they had met the odd pair before. At last, a boy, played by Abbey Geiss, appears and tells the pair that Godot will not be able to meet them tonight, but certainly tomorrow. So ends Act I.

It’s quite difficult to perform and keep an audience interested in play that lacks in rapid, over-dramatic action custom of our modern explosions and drama world. However, “Waiting for Godot” shows that there is something to be said for quiet, ordinary conversation. The cast of “Waiting for Godot” doesn’t have excessive action for them to use as they interpret their characters for us. They have only the characters themselves to draw upon, but that proves not to be a problem for this talented cast for they keep the audience spellbound the whole two hours.

One character that I enjoyed because of this reason was Vladimir. While the rest of the cast seems to accept things without question, Vladimir is the one who takes a moment to actually think about what is happening and his role in it. It is he who takes care of Estragon’s needs, confronts Pozzo about his mistreatment of Lucky, and takes time to question the boy about Godot. Vladimir continues to surprise the audience as the play goes on and his character is exposed.

In my opinion, Vladimir becomes one of the most fleshed out characters in the play. Although the meaning of the two-act play is left up to the viewer’s opinion, it would be near impossible to walk away from this play without having taken some time to reflect on one’s own life as Vladimir often does.

The only major drawback was that the plot, or lack thereof, may be lost on those who are anticipating a dramatic play. “Waiting for Godot” centers on Vladimir and Estragon as they, as the title states, wait for Godot. And wait they do. They wait patiently for Godot both acts, with only the interruptions of Pozzo, Lucky and the boy to break up their otherwise suspenseless wait.