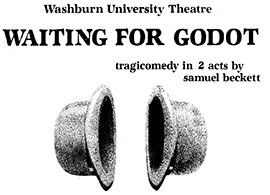 Washburn University Theatre Department presents "Waiting for Godot" by Samuel Beckett this summer. The play will also be performed in August.

While the characters of Estragon and Vladimir endlessly wait for Godot, the wait is over for Washburn students and Topeka playgoers who are craving summer theatrical entertainment. The production of Samuel Beckett’s “Waiting for Godot” opened June 20, 2014 at Washburn’s own Andrew J. and Georgia Neese Gray Theatre, housed in the Garvey Fine Arts Center.

This play is not the typical theatre experience, though. Dubbed a “tragicomedy,” the playwright himself was at odds with the purpose of the production.

“I don’t know who Godot is. I don’t even know if he exists. And I don’t know if they believe in him or not, those two who are waiting for him,” Beckett said concerning the resolution of his play.

The play’s scenery is incredibly simplistic. A single tree stands in the background, and as night falls, a moon is shown on the scene. The concept of the play allows viewers to watch in as the characters of Estragon and Vladimir wait for Godot along a country road. They struggle to remember what the man whom they wait so desperately for looks like, talks like, or even why they are waiting for him in the first place. The monotony of the wait is broken by the appearances of Pozzo and his slave, Lucky. Yet even these characters go through perceived changes in between the acts.

“Waiting for Godot” must be seen to be understood, and even then, the performance is as such that it will leave viewers contemplating the concept even after the final curtain call.

Paul Prece is the chair and professor of the Washburn University theatre department. He spoke about the unique message of the play, and why it was selected by the department as a performance piece.

“In a way the play is a bit of a mystery that will go unsolved,” said Prece. “At the same time the audience witnesses the interaction and dependency of Gogo and Didi and Pozzo and Lucky. What they ‘do’ is as important as what they say. Plays depend on ‘doing.'”

Concerning the audience’s ability to relate to this specific play, Prece said, everyone knows about “waiting” so audiences can relate simply on that level.

“Otherwise there is the absurdity of the situation that might take an audience off guard,” said Prece. “There are some very funny moments.”

Admission for students, teachers and faculty is free with a Washburn student ID. For general admission, the price is $8.